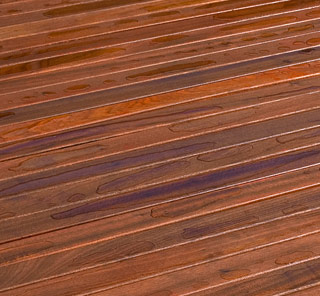 I started building decks in 1989 in Atlanta, GA and prior to that I had built a few decks in Southern Indiana. The majority of the decks were either built with pressure treated southern yellow pine or western red cedar; rarely would I see an exotic hardwood deck or redwood deck being built.

Since then, there has been an overwhelming amount of new products introduced to the industry. I am going to write briefly on my experiences with of some of those products and hopefully give you some things to think about before choosing your decking material.

Each and every decking product has its own advantages, disadvantages and varies in cost. When choosing your decking product, remember that no single product is right for everyone, so know what is important to you and fits within your budget. Initially, it’s very important to obtain as much information as possible before making a final decision on which product to use for your deck.

This may be through searching the internet, talking to friends, family and neighbors that have a deck with a product you are considering. The very best advice I can give you is, go out and look at older decks built with the products you are interested in. Most importantly, whichever product you choose, it should make you want to be outside spending quality time with friends and family on your new deck. What I say to my customers is: I want to build you a deck that will change your lifestyle, not just build you a pretty picture.

Redwood Decking: It was the most popular, high-end decking material in Atlanta in the early to mid-70s. There are two basic grades of redwood, sap and heartwood. Sap was the more popular of the two for decks, mainly due to the cost of heartwood. I used redwood for some of my deck railings but only built one complete deck with redwood, and the end result was fantastic.

Redwood is a soft-wood which makes it very easy to work with but you need to be more careful not to dent or scratch it during the installation process. Due to acids in the wood that react to certain metals, this type of wood requires stainless steel fasteners. Redwood is a very good product, but it became very scarce and costly in the mid-90s. You can still purchase redwood but you have to order it directly from suppliers in California. That said, I do occasionally see an old redwood deck while out on appointments, usually in and around Dunwoody Ga.

Cedar Decking: Western Red Cedar is grown in the upper western states of the US and Canada and is shipped to other parts of the country typically by train. Cedar became very popular in the south for decking in the early to mid 80s and is still being used today but not to the same degree. Cedar, like redwood, is also available in both a sap (knotty) and heartwood grade (clear kiln dried).

Cedar also contains acids which react to certain metals and requires a higher grade fastener; double hot-dipped galvanized, aluminum, or stainless steel. Cedar is similar to redwood in workability and durability, but should be thoroughly sealed to protect it from the elements. Cedar seems to have between a 10 to 15 year life span in the south but performs much better in other parts of the country. Personally, I have only built a few decks with cedar but enjoyed working with it and loved the finished look. I currently use cedar a good bit for our screened-in porches.

Pressure-Treated, Southern Yellow Pine Decking: The first decks I built using pressure-treated southern yellow pine were in 1987 in Southern Indiana and to this day I still remember the smell of the pressure treated wood and seeing the Wolmanized tag at the end of the board. The deck consisted of 5/4” decking, 2” x 2” wood pickets nailed to the side of the deck band, 2 x 4’s were the railing runners, and a 5/4” deck board was the rail-cap. Wow, how things have changed!

When pressure-treated wood was first produced for decks, no one had any idea of the influence it would have on the decking industry. At first, it was pretty simple. “Let’s prevent wood from rotting, so people will have a product they can use outside for decks that will last longer than other products.” Over a short period of time, industry leaders found out people were living on their decks and wanted more out of their outside living spaces.

There were, however, some issues with the pressure treated wood; it faded, checked, cracked, splintered, warped, twisted and cupped over an extended period of time. Some of these issues were due to improper installation of the material, lack of maintenance and some were the manufacturing process itself.

Improvements had to be made to the product for it to be competitive in today’s market. The improvements were; better grades, milling patterns, preservatives, stains/sealers, manufacturing techniques and kiln dried material being offered.

Composite Decking: In the early-90s, I was first introduced to composite decking material. I was completing a deck for a family, when a gentleman approached me with a plastic/PVC decking product. At the time, I found it to be unique and very interesting. It wasn’t until the mid to late-90s that contractors actually started using composites in the Atlanta area.

When composites were first introduced into the marketed, they were marketed as a maintenance-free product. Homeowners loved hearing this, imagine no more maintenance! After millions of dollars paid out in lawsuits by the composite companies, they now market their product as low-maintenance not maintenance free.

As a contractor myself, it was not only difficult knowing all of the products and their differences, but with each new composite material, came new installation and maintenance issues. The problems I had ranged from the initial installation of the product to problems that would occur months and/or years after being installed. I believe the worst experience is replacing a defective composite material, only to find out the line has been discontinued or the company is no longer in business.

Due to so many product failures, there are far less composite companies today than when composites were first introduced. Now that composites have been available for some time, we know a lot of their issues and the product is much better. The newer composites are made from mostly PVC and offer a hidden fastener system.

This system looks very good when first installed, but my concern is how it will perform in the future. The older decks I see with these systems do not look nearly as beautiful as they did upon first completion. If there is one truth to decking it is that deck boards fastened through the top surface makes for the strongest possible deck.

Exotic Hardwoods Decking: The exotic hardwoods were actually available before composite materials but very few people knew of them due to the lack of marketing. IPE was the first exotic hardwood I remember being introduced into the industry; I saw it at a home show in Atlanta in 1989. When I first saw it I thought it looked awesome and it would make for a great deck, it wasn’t until several years later that I got an opportunity to build decks with IPE. I found IPE to be a little more time consuming installing the decking, but a whole lot more time installing the railings and amenities.

The cost of the IPE and the exotics are a good bit more expensive, but seem to be durable and look very nice. If you wish to keep the rich beauty of your exotic hardwood deck, you will have a good bit of routine maintenance, either yearly or sometimes twice a year. Exotic hardwoods do get very hot in the summer due to it being a darker and denser material which holds heat.

If you choose to use a hidden deck fastener with your exotic hardwood deck, I would recommend the deck master system. There are a lot of biscuit and clipping systems out there, but I have yet to see one that performs well long term. Today, there are also several other exotic hardwoods on the market used for decks, each having the pros and cons. Remember, do your research first before purchasing!!!

Thermally Modified Decking: I was first introduced to Thermally Modified Wood at the deck expo show in Las Vegas around the year 2006. The company I met with was from Finland and I thought their product sounded like it could change the industry. It was described as a maintenance-free product, no warping, cracking, splintering or checking, WOW! It was the perfect solution for both people wanting a wooden deck and for all the contractors who loved working with wood. The product was not yet on the market, but I couldn’t wait to use it.

Being extremely interested in the latest industry developments; I stayed in contact with the manufacturer of the product until it was sold to the public. I was the first contractor in the country to use their product and was very excited. I loved the look of the thermally modified decking; it was relatively easy to work with and made a deck that looked second-to-none.

Once the product had been installed and a significant amount of time had passed, I began noticing the product bleaching-out and checking starting to occur. This was certainly a concern for something advertised as maintenance-free product that did not check. I had to apply an oil-based color preservative to the deck to help with checking and bleaching, just like other wood products. This step seemed to alleviate most of the issues I encountered.

Aluminum Decking: During my time as a contractor, I have seen several aluminum railing systems for decks and docks which really doesn’t look all that good up close. Aluminum decking to me seems like it is reserved for decks near the water or docks.

This past winter I met with a manufacturer (Wahoo Decks) of aluminum decking and railing product which stood out as the most visually appealing in this particular category. One product they developed that really stood out from the rest was this water-tight, aluminum decking board that had a baked-on wood grain finish. When I first saw it, I actually thought it was wood.

The product is somewhat costly and still seems to me that it is more suitable for decks near water and docks. Time will tell whether or not homeowners will want and be willing to pay for this product. The advantages are; it stays cool, very durable, water tight (creating a dry underneath area), maintenance-free (except regular cleaning) and actually looks like wood.