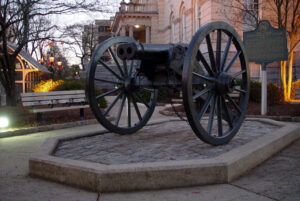 The Double Barrel Cannon, located at 301 College Ave, Athens, GA 30601, is an enigmatic and eye-catching relic of the American Civil War. War has been featured constantly throughout most of human history, and similarly, the strange weapons that people have invented to support their wars. Very few weapons, however, are as curious and comical as the Double Barreled Cannon in Athens, Georgia. An artifact from the civil war, the double barreled cannon was proposed as a weapon to fight against the Union. After a series of dismal test firings, the cannon was deemed a failure. It’s most famous as a tourist attraction for it’s curious design.

Originally in 1862, John Gilleland built the cannon, which was envisioned to cut down wide swaths of soldiers “as a scythe cuts wheat”. The idea derives from an older take on a double barreled cannon designed by Antonio Petrini in 1642. The cannon would achieve this by simultaneously launching two balls connected by a chain. The cannon balls would pull the chain taut, and thus launch a wide-radius projectile at an oncoming army. As great as it sounded on paper, the design failed to provide such results in reality. 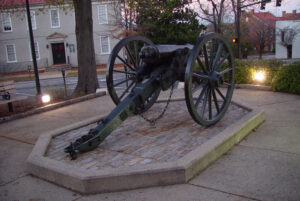 As it turned out, igniting both projectiles at the exact same time, was nearly impossible. This led to numerous problems, and rendered the cannon virtually unusable. During the weapon’s test firing, the cannon balls would often spin off in random directions, and not hit anything close to the intended target. Witnesses to the testing describe the weapon as haphazardly destroying crops and small growth far from where it was pointed at. In one test, the chain that connected the two balls broke, which caused the balls to fly off, destroying the chimney of a house and instantly killing a nearby cow.

Still, attempts were made to get some kind of practical use from the cannon. Gilleland was determined to prove the cannon’s usefulness, and continued to show his weapon to Confederate leaders. Because of it’s obvious impracticality, the cannon failed to garner the interest of those it was shown to. Eventually, the cannon was used one time to launch a flare signaling an oncoming march of Union soldiers. However, the report of the Union advance was false, and the cannon went into storage, not to be seen again for more than a decade.

Most of the cannon’s life has been spent as a tourist attraction in Athens. The cannon is a popular piece to stop by, mainly because of it’s strange and curious design. Locals and visitors to Athens find the cannon to be an amusing stop to observe for a few minutes, taking in it’s history and learning about how cannons work. As it’s located at City Hall, it’s worth mentioning that there’s not too much for your average patron to see and do around the cannon, so it’s generally seen as being fun if it’s on your way.