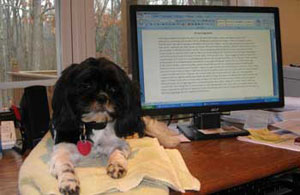 I’ve been asked many times over the years where the name “Tailor Decks” came from.  Typically, and probably naturally, new customers think my last name is Taylor and greet me with “Mr. Taylor”.

The truth is that the name “Tailor Decks” came about when I was trying to find a name that best suited how I wanted to present the company. After all, when I was young, having my own business was never a question of what, when, or where.  The only question was what the name was going to be.  When it came time to launch, I grappled with a lot of options.  Because the heart of the company was going to be (and still is), customization, we threw around a lot of options on a notepad…mostly around the word “custom”.

But “Custom Decks” (and variations) just didn’t seem to work. And “Atlanta custom decks” wasn’t much better. At some point during this brainstorm I wondered where my wife’s dog was. “Taylor”, a miniature dachshund, had been quietly sitting at my feet the whole time.  In addition to being my quiet bedrock through the tough times, Taylor instantly became my inspiration.  A little spelling change and the company’s name was made…and the company launched.  So yes, the company’s name, “Tailor Decks”, was canine-inspired.

Taylor passed away a few years ago, but since then, we’ve added a Shih tzu named Cobi to the Tailor Decks family. Cobi is one of my best buddies…and he makes it a point to come out to the sites to make sure we’re on track. Scott, who works with us, likes to call him “Tailordog”. I like that.